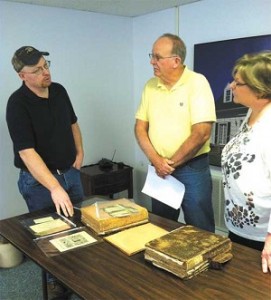 All he wanted to do was buy horseshoes for his son at an auction in August, but Brad Zornes, of Jackson, ended up with three very old Bibles and a months-long genealogical quest involving some early Jackson County families.

“There is so much unknown about the Kinnison side of the family,” said Michele Tucker, John’s wife and a rookie family genealogist. “We are so excited! Simply holding the Bibles that belonged to members of the Kinnison family is wonderful.”

Zornes single goal was to reunite the Bibles with family descendants.

“I’m glad it worked out,” Zornes said. “The Bibles have gone back to the families.”

After the auction, Zornes told friends and coworkers about the three Bibles right away. One day, Zornes was telling a coworker about the auction Bibles over lunch. A day later, when the coworker looked at the Pittenger Bible, he recognized all the names listed in the Bible, the match was made and the Bible returned.

The two Kinnison Bibles were more of a challenge. Zornes talked to everyone he could think of and then turned to the Jones Museum and the Jackson County Chapter of the Ohio Genealogical Society for help. The Jones Museum was able to house the Bibles and make them available as the search continued. Jones Museum Director Megan Malone took the Bibles to a JCOGS meeting and members made suggestions as to who might be the key to unlock the mystery.

Susan Hill, of Chillicothe, was one of the first to respond to the JCOGS newsletter story and she provided a detailed genealogical chart to the Jones Museum for inclusion in the family histories file at the museum. Hill’s late husband was a Kinnison family connection but she desired that the Bibles go to living descendants who would cherish the Bibles as a connection to the past.

After a few months, Michele Tucker saw the JCOGS newsletter posting and called the Jones Museum, which got in touch with Zornes. Then Tucker and Zornes talked and the deal with done. The Tuckers came to Jackson to collect the Bibles and then they were headed to Marietta to show John Tucker’s oldest sister the pieces of family history.

“With John’s sisters both being ill, the timing of this is remarkable,” Michelle Tucker said. “They are thrilled to be able to see – and touch – something from the Kinnison family. We are so appreciative of all the helps we received from so many people in Jackson. We will be back to see and learn more.”

Eventually, the Tucker’s believe they will donate both Bibles to the museum Salmons envisions for the Berlin Crossroads area.

The Jones Museum, which is the former home of world traveler Lillian E. Jones, is now a home for education, history and culture. Admission is free to both the Jones Museum and the adjacent Carriage House, which is a source for genealogical research in Jackson County. Appointments for use of the Carriage House can be made by calling 286-2556. The museum is open Tuesday, Wednesday and Thursday from 10 a.m. to 3 p.m. and by appointment.

JCOGS, which is a member chapter of the Ohio Genealogical Society, meets at the Jackson City Library on the second Saturday of each month at 10:30 a.m. and can be found at www.jacksoncountyohiogen.com.