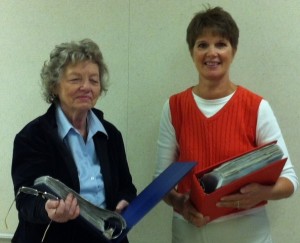 JACKSON— Genealogy resources are richer and fuller now at the Jackson City Library through a special donation by researcher Ruth Hayth of Wellston.

In 1996, when Hayth’s husband, Robert, died, she found herself clipping his obituary out of the local newspapers to send to out-of-town friends and relatives.

As a long-time genealogy researcher, Hayth knew that obituaries as they appear in the newspaper can be very helpful to family researchers so she started clipping every obituary from The Telegram, the Jackson Times-Journal and the Athens Messenger from 1996-2006. Not only did she collect and clip the obituaries, she put them in albums for each year in alphabetical order by surname.

“It seemed reasonable to clip other obituaries too and put them in an album so others would have them,” Hayth said. “Before long, I had quite a few albums taking up space in my house. I had too many to keep and I needed to get them to someone who could use them.”

So Hayth brought her 11-volume set of obituaries from 1996-2006 to the September 14 meeting of the Jackson County Chapter of the Ohio Genealogical Society. The group meets monthly at the Jackson City Library and Hayth is the vice president.

At the end of the meeting, Hayth asked if anyone had any ideas on what to do with her 11 albums of obituaries. President Donna Scurlock hopped up and left the room, but quickly returned with Library Director Laura Thorne and a book cart.

“The library can take them,” Scurlock said. “They will be put to good use here.”

And so they will be. Thorne said the volumes will be housed in the local history/genealogy section and will be available for copying by library visitors.

“It will be easy since they are already catalogued,” Thorne said. “Alphabetized by surname, separated by year and ready for use.”